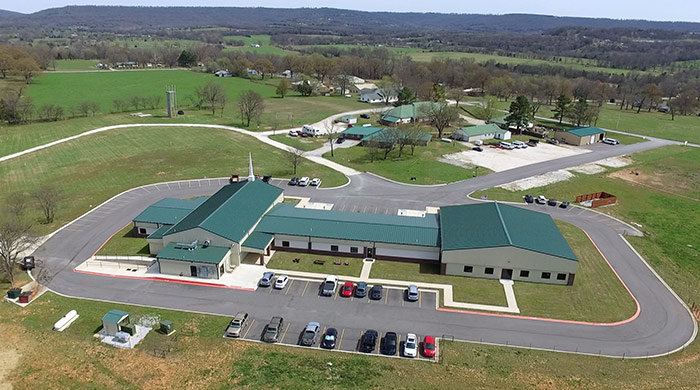 MORROW, Arkansas — The environs of Teen Challenge Adventure Ranch, a picturesque 31 acres in the Ozark Mountains of rural northwest Arkansas, are just what troubled boys need to get into shape, physically and spiritually.

Even with parents who may be pastors, missionaries, or otherwise respectable Christians, new arrivals sometimes are hardened and even dangerous. A few arrive shackled. One recent newcomer kicked out a dorm glass entry door, which is temporarily boarded up.

“These are difficult minors,” says Darren J. Reynolds, who is executive director. “These adolescents don’t want to be here. They think it’s everyone else’s fault.”

Reynolds, a graduate of Central Bible College in Springfield, Missouri, had been a youth pastor in Illinois before taking a break to launch a vending business in Tulsa, Oklahoma. Itching to get back into ministry, Reynolds began driving to Morrow once a week to volunteer, initially as a handyman. When the executive director resigned abruptly in 1996, the board asked Reynolds, then 27, to take over.

At the time, the school had just four students and eight staff members. Now there are 33 students from across the U.S. and 48 staff members, 14 of them working in direct care.

“In the beginning, most of the boys don’t want to have anything to do with God,” says the 50-year-old Reynolds, a U.S. missionary. “They hate their parents or anyone over 18.”

“There is enough change just coming here in the first place,” says Jennifer E. Grim, the  clinical director. “Kids learn how to manage fears and anxiety in group and individual therapy. We won’t eradicate those emotions, but we don’t want them to rule their lives.”

Boys ages 14 to 18 typically stay at least nine months, with the first 90 days containing a highly structured schedule. Once the residents settle in they attend an academic boarding school, studying online. In a classroom, students sit at a wooden-enclosed cubicle partitioned from other boys. On-site teachers provide tutoring for course work.

Students primarily live at the ranch because of substance abuse and behavioral problems, although the overriding factor for some is trauma, anxiety, or depression. Since Reynolds came on the scene, there has been a shift. The danger in the early days stemmed from youths wanting to run away. These days, teens are more likely to engage in self-harm attempts, one of the reasons there are 100 cameras on campus.

Reynolds has been married 30 years to Mary, a nurse who volunteers two days a week at the ranch. The couple have three children.

Although it can be challenging to find workers in such a potentially high-burnout profession, many Adventure Ranch employees view this as a passionate ministry calling. For instance, Program Director Justin J. Smith has been here 23 years, Grim 15 years.

“The presence of God at Adventure Ranch is undeniable,” says Kristy S., whose son Chaz graduated from the program in October 2018. “It’s apparent that everyone working there is led by the Spirit of God. I can’t speak highly enough about every person who works there. They’ll forever be family to me.”

“We’re up front that we are an intensely Christian program, but students don’t necessarily have any Christian background,” Reynolds says.

Almost immediately after moving in, boys embark on a three-day hike in the mountains. It’s part of the center’s overall adventure-based learning formula that features camping, backpacking, rappelling, canoeing, swimming, and spelunking. The property also includes a certified ropes course in which students learn the importance of teamwork, goals, and perseverance.

The outdoor emphasis is one of the reasons Todd and Kristy S. chose to send their son Chaz to Adventure Ranch.

“Chaz had mastered lying and manipulation, almost as if he were two different people,” remembers Kristy, a national retail field representative for Sprint based in Rogers, Arkansas. “He was a sweet kid we wanted to believe, but he would tell us bold-faced lies that shattered our trust in him.”

At 17, Chaz had been expelled from another boarding school.

“Through counseling we found that the extent of his drug use was deeper than what we had imagined,” says Kristy, 50. A judge ordered Chaz to drug rehabilitation. The program of Teen Challenge, fit the bill.

Few drug-addicted teens are physically fit. They tend to be sedentary smokers and/or drinkers.

“Outdoor adventure can be a big shock to the system,” says Smith, the incredibly fit 47-year-old program director. “It’s not punishment; we don’t take them on a death march. We just show them the therapeutic elements of God’s nature.”

Smith pioneered the outdoor adventure program soon after he arrived in 1996 as a new Southeastern University graduate. Six years later, Adventure Ranch added rock climbing and rappelling to the outdoor list of opportunities.

Every day, residents must participate in an hour CrossFit gym workout, implemented a year ago. Smith is a level 1 instructor for the high-intensity routines. Multiple studies have shown the benefits of physical exertion, not only to stimulate brain activity but also to decrease aggressive behavior.

“When a student starts to get healthy — physically, emotionally, and spiritually — you can see a change in his countenance,” says Smith, a licensed minister. “He begins to understand he has a purpose in life.”

“When they get here they don’t want to experience any kind of pain or suffering,” says Grim, 39. “The CrossFit program is awesome because the results are immediate.”

As a part of group activities, boys participate in equine therapy, a program devised by Grim and Gene R. Woods, certified drug and alcohol rehabilitation counselor at the facility. Working under the supervision of an equine therapist, boys learn everything from better handling stress to developing empathy for others.

Initially, horses customarily react to whatever emotion a boy exhibits: if the youth is angry, the horse will be stubborn; if the boy is scared, the animal is skittish.

“It helps build communication and problem-solving skills,” Grim says. “The boy also builds a relationship with the horse that isn’t fake. They learn how to manage anxiety and fears.”

A total of 11 tame horses have been purchased, donated, or are owned by staff members. Some boys work with them on a daily basis.

“Equine-assisted therapy is a way to break through to many boys who are resistant to individual therapy,” Reynolds says.

Chaz graduated from Adventure Ranch in October 2018 after an 11-month residency. He is wrapping up a six-month stint as a missionary at Teen Challenge Costa Rica.

“The whole perception of how Chaz sees the world changed because Jesus changed his heart,” Kristy says.

Adventure Ranch also provides a six-month aftercare program, which includes  biweekly interaction with parents as well as in-home visits to help family members readjust to one other. The plan includes connecting the family with a Christian therapist and support group in their vicinity.